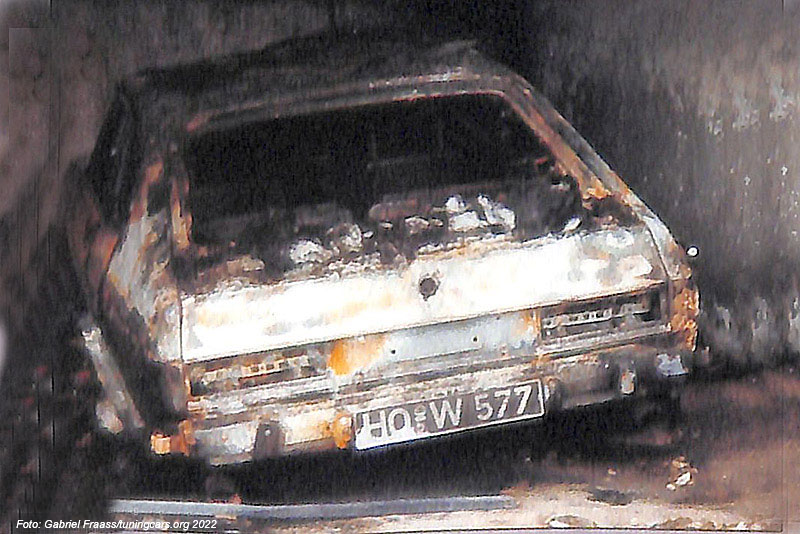 Original words translated by Google Translator – Prelude: My work colleague (IT company Sommer) Alex Fraass R.I.P. told me about his brother Gabriel’s burnt down Capri. I contacted Gabriel to investigate. Indeed. He was able to provide me with pictures and tell me the exact process on tape. Where the Capri burned down in Hof (Nothern Bavaria) Kornbergstrasse in the valley below ex-Alfa Polster. „burn out“ was the perfect successor to my first article in Ford Drive with the naggering Maadla (Hofer Frankizismus) on the loading area of ​​the Ford F100 pickup. The Capri was my second prank.

Owner Gabriel Fraass told me: „Uncounted are the hours I’ve invested in my car“. Gabriel remembers his completely rebuilt Capri. A Capri on which only the chassis and a few small parts corresponded to the series. „It was all over in a few minutes, because when I got home from work that Friday, I just saw the last tire explode,“ he says of the end of his orgy of mechanics Material up in smoke. Gabriel was a passionate Capri fan. As with many of his brand colleagues, the choice fell on a used Capri III, equipped with the standard 2.3 liter engine with 114 hp. It took ten years before the well-considered decision matured: There will be May under the hood. During the 1994/95 winter season, Gabriel breathed a good 180 hp into the engine using a May turbocharger, a 290-degree camshaft and peripherals adapted to the performance increase. „Who thinks, four-speed gearbox out, five-speed in and the Things are going well, subject to a huge error,“ he emphasizes unforeseen tinkering. „Even the installation of the servo of the 2.8i had its uses snags“. The cooling system of the Escort Cossie and the contactless ignition of the 2.8 factory turbo should be mentioned as further examples of the complex work on the object. „I was only allowed to enjoy my bullet for almost 500km. It was simply my dream Capri“. Height-adjustable Fichtel & Sachs struts were sufficient for the increased performance. Eibach springs and race-proven Konis from the yellow collection provided stability and enabled the Turbo to fully exploit its capabilities even on winding roads. At a standstill, the engine compartment offered a wide range of looks. Either painted in body color or immersed in a chrome bath, the surfaces of the add-on parts presented themselves in their best gloss form.

New Features for the car: The early 1990s were still the glory days of plastic dinosaurs. 235/60 tires rolled on 9.5 x 13 BBS magnesium rims, keeping the distance to the axle by means of 24mm discs. The rear end, side skirts and front spoiler came from the Capri III kit, just as you could order it from the Ford dealer. The mighty rear wing, a reminiscence of the days of thunder, represented a 1,000 DM manufacture by the Suhe company. Even the photo of the literally „flame red“ interior does not show the very latest status, as the door walls have been reworked. The helicopter look of the instrument panel was phenomenal. „I used longer Bowden cables from a motorcycle shop to move the heating controls down and put six round instruments in their place in an aluminum sheet that I folded myself,“ explains Gabriel, pointing out the displays that he painted himself. „The center console is a unique piece of wood, the cutouts for the entire stereo equipment were sawn out as required. After completing the interior, I covered everything with leather with a friend“. Let’s talk numbers, 6 square meters of the finest quality sewed together in endless weekend shifts. The Capri even served as a wedding car for close relatives and was a welcome guest at Capri meetings. „I’m not a cup hunter, I’m happy when other people like my car“, according to this motto Gabriel intended to start the young season 1995 „On Thursday evening I parked my polished and fully tanked car in the double garage, prepared for the Capri meeting in Hanover.

The neighbor’s moped could only be refueled with a 10 liter canister, so on Friday afternoon he tried to „cleverly“ circumvent the problem by decanting it into a handy 5-liter canister. Using the tried and tested hose method of ensuring the flow of fuel by suction and transfer, the trickle missed its intended target and flowed in the direction of the peacefully slumbering coupe. No problem, the mofisti seemed to think and grabbed a disused piece of clothing with rivets to clean it. The mixture ignited due to the friction of the rivets on the concrete floor, the „gas station attendant“ suddenly got into a rush and made his most serious mistake. „Extinguish with water!“ it may have shot through his head, while doing so he poured a bucket of the finest Hofer wet into the seat of the fire. The old saying „pouring oil on the fire“ vehemently underlined its right to exist, because the spraying flames saw a found feast in the plastic of the extensions. The way to the fuel line was only a short one. In a few seconds the Capri was on fire, a few minutes later 58 liters of Super showed their enormous power of development. When Gabriel got home, he was initially amazed at the smoke and crowds of spectators in front of his garage.

When the last tire exploded, he was sitting in the front row. How are you feeling at this moment? With the end of Capri, the time for expert opinions and lawyers began. Taking into account the acknowledgment of the owner’s own contributions, the available appraisal came to DM 28,900. The opposing liability insurance company rushed to order a new report based on the burned car and the photos shown here, which estimated the value of the Capri at DM 20,000.00. „On the one hand, my bad luck was that there were no photos of the car in its last condition. Neither the revised interior nor the fully chromed engine with May-Turbo was captured in the picture,“ Gabriel regrets the lack of current documentation. „On the other hand, my own work was not recognized because I could only show invoices for the material“. The insurance company ignored the painting work, the installation of the turbo and the leather processing, all of which he had carried out loosely after the Beatles „with a little help from my friends“. A settlement sought by his lawyer for around DM 25,000 was strictly rejected. With great difficulty and after months of tug-of-war, the insurance company paid DM 23,200 including loss of use etc. It seems that even with an appraisal of DM 30,000 and better documentation material, a higher value could hardly have been achieved, because one hears and marvels at the original tone of the TÜV Bamberg:

Only for vehicles with history or with racing history or when it comes to rare versions, a price of more than DM 20,000 would be justified.