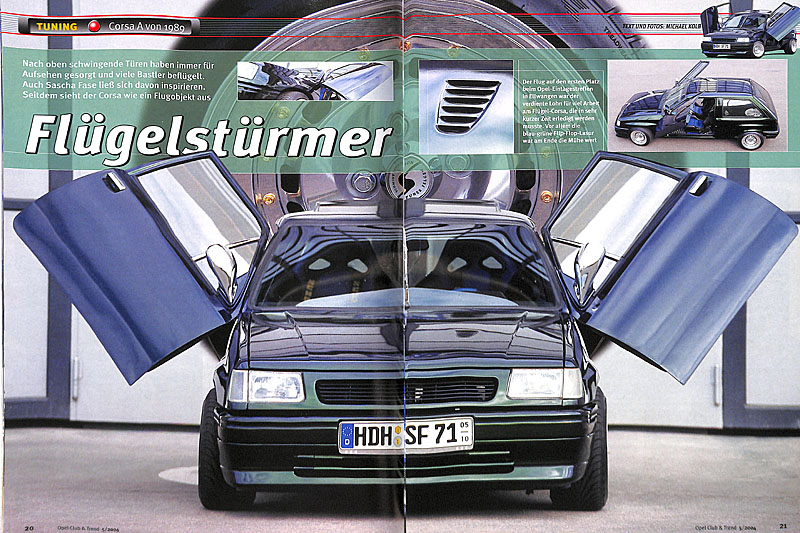 When Sascha Fase’s Corsa A appears in Opel Tuning 3/2004, the story is already history. At the Opel meeting in Ellwangen on May 16, 2004, it rolls to the award ceremony with the gullwing doors open. A few months later, the new version of the Corsa appeared in Opel Club & Trend 5/2004, with the Corsa holding my personal record of the “fastest double”. *fanfare*

Doors that swing upwards have always caused a stir and inspired countless hobbyists. Sascha Fase was also inspired by this and turned his Corsa into a

A gull-wing Corsa is nothing new on the scene. In southern Germany, Timo Mühleisen probably owns the best-known „winged Corsa“, whose door construction has already been admired at many Opel meetings. Sascha also appraised the very well done conversion and then decided to give his green Corsa wings in a similar way. The original motivation, however, lies much deeper. The Corsa was already a car prepared by the previous owner, in which Sascha’s personal effort took place exclusively in the interior and engine compartment. „The previous owner did most of the work and I’m not one to adorn myself with someone else’s feathers,“ he says, explaining his attitude. Actually, he was only concerned with drastically changing the body. Immediately after the 2003 season, he completely disassembled the Corsa, since the bright green paintwork was also to disappear. The bare body was prepared for the doors. 3 mm thick steel sheets were cut and welded to the A-pillar. The door leaves were also reinforced with sheet metal strips to give the door enough stability when open. Sascha found the right hinges in his workshop, although the origin can no longer be clarified. The dampers of the VW Sharan tailgate proved to be suitable stabilizers to support the forces that occur during the opening process on the sill. The precision work involved in adjusting the opening angle while simultaneously reducing the gap mass proved to be extremely time-consuming. Only after the spars had been revised several times did the wings rise high enough into the sky and the doors close without leaving too much of a gap.

The previous owner had left the first traces of smoothing, which is usual in the scene, on the rear end. His work ended with the dismantling of the lock and wipers. Sascha also placed the vehicle registration plate in the apron, in which the plastic was sawn open and the indentation was determined using a cardboard template. The previous owner had also taken care of the GSI front spoiler and the machining of the side parts for a long time, but now it was time to sand down the green paintwork and eliminate all bumps. Sascha ordered the blue-green flip-flop glaze over the Internet from a US company and had it applied by the BRENNER paint shop in Heidenheim in a total of 7 passes. Time was pressing. The stand at the Tuning World in Friedrichshafen 2004 had long been reserved and the Corsa was still half-naked in the garage. Luckily, Sascha only had to install the interior with its blue and black leather interior, as the interior had already been renovated. The engine compartment in particular looked devastating. The 176 hp 16-valve engine would have fitted well in the engine room of an oil tanker and required a general cleaning. is that chrome In fact, under the layer of oil was a visually and technically prepared engine. Is there really still time to optimize the engine compartment again before Friedrichshafen? The air filter from RACELAND arrived at the last minute, so to speak, but there was no longer enough time to tinker with a bracket. Thanks to the help of Uwe Spähn, the Corsa stood at the designated place at the Tuningworld in Friedrichshafen and caused a stir there

EXHAUST: Manifold, Group A half system

THANKS TO: Auto Staiger Heidenheim, Uwe Spähn, Kellndorfer bodywork in Gschwend, my darling Claudia & daughter Leonie-Natascha for their patience!!!