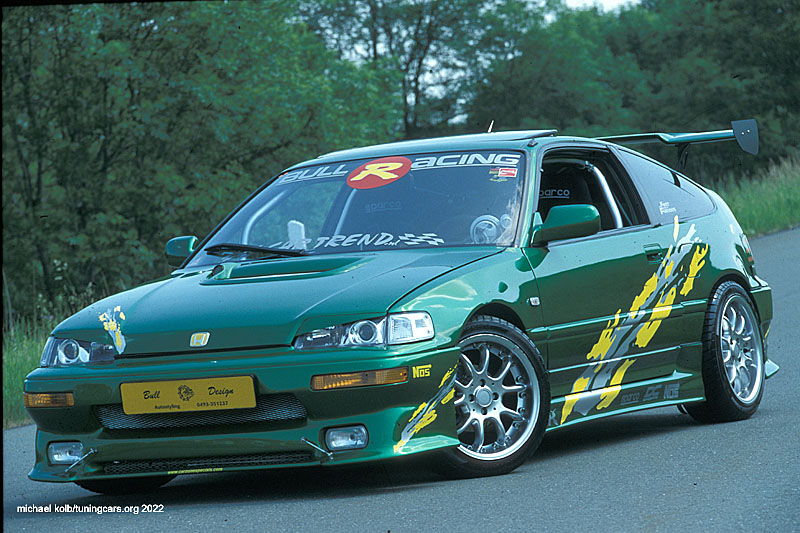 (Translated via Google-Translator) I have fond memories of the Honda Pfingst-meetings that the CRX Club RC Oberfranken organized every two years in Köditz near Hof. Among Japanese vehicles, Honda was at the forefront of the magazin AUTOTUNING and this meeting was one of my best hunting grounds. Parallels to the Celica scene were obvious to me: few local cars, but many from Switzerland and the Netherlands. The „Fitting Bull“ from Gemert (NL) corresponded exactly to the design patent of the time, which today, almost 20 years later, a 20-year-old can hardly understand.

What Richard Dwanna has pulled out of his Honda CRX with the help of Bull Design and CRX Club Holland is simply amazing. You can hardly define the trend of the time better. Here are the results of the Autotuning Jury: Netherlands twelve points, le Paybas douze pointes, Niederlande zwölf Punkte. The optical performance of the 1988 CRX ED9 from Gemert in the Netherlands is impressive from every angle. The first Honda CRX of the skilled worker in door and frame construction was a virgin series vehicle that could not show any tuning measures.

It wasn’t until his second Honda CRX that Richard got caught by the virus. After a Twister air filter and a homemade air intake marked the beginning, he really got going. „NOS is operable, but not connected“ is how he explains the unconnected nitrous oxide system, because the lines were laid in advance. Richard is currently having a new unit prepared, which will be implanted with the stability for the short power sprint. The currently installed 1.6 liter machine with 125 hp specified as standard impresses with its appearance. Valve covers and several ancillaries have been polished to a mirror finish. Instead of extreme lowering, Richard placed great value on drivability. The 40mm lowering rarely causes problems and even the 7.5×16 inch Brock B6 wheels should hardly overwhelm the wheel arches. The priorities are clearly in the typical styling of „the fast & the furious“.

The CRX stands there like it’s straight out of the movie. Spoilers, wings, design paintwork were matched almost authentically. The CRX has (almost) everything a fast and furious heart desires. The self-designed striping design does not consist of stickers, but was painted on. The highlight is undoubtedly the wing attached to the Muggen rear spoiler. In addition to the mighty wings from Wings West and the aprons and sills from CarZone, you come across a foreign part from a world champion competitor. The „Carlos Sainz“ air scoop was taken from the ex-rally champion Toyota Celica GT Four. The view ahead is unclouded. Richard procured the clear eyes from the overseas version of the CRX from the USA.

The interior continues the won impression of a movie star. The 32mm Momo steering wheel of the coupé, which has been downgraded to a 2-seater, can be removed with a flick of the wrist to make it easier to get into the Sparco shells. Once you sit deep down in the cell protected by a safety bars cage, you can enjoy a sporty and showy interior. The two yellow rocker arms with safety caps and various additional instruments will only serve their purpose with the new engine. The bottle of the NOS system mounted on the cross brace in the trunk would be ready for use, as I said it is only for show at the moment. And this CRX undoubtedly has it. He was not only in the front row at the premiere of „2Fast & 2Furious“ in Rotterdam. Pure zeitgeist!

THANKS TO: Thank you Rob (my CRX friend), Geek ( from the company `Bull-Design), Sandra (my girlfriend). And all the other people who helped me from the CRX Club Holland