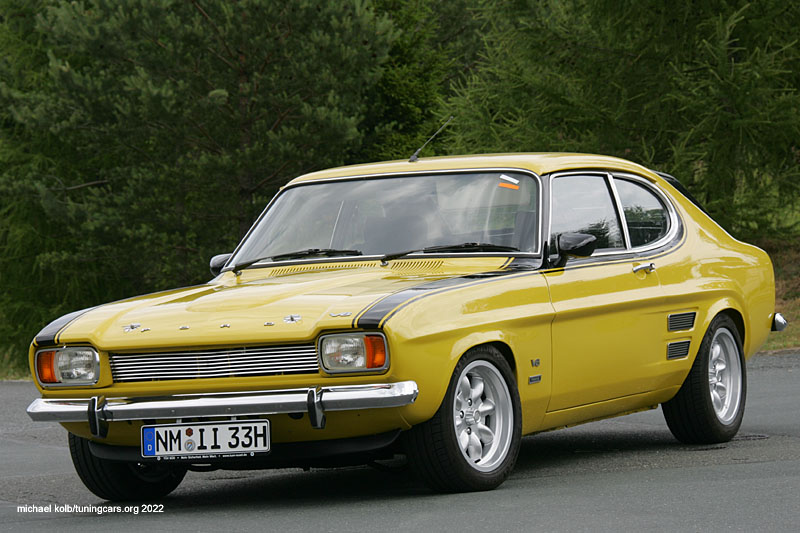 Chasing vehicles for the magazine Ford Scene Drive, Capris stood on first place. No matter if individual conversions or rare originals. Georg Klughardt had both: the customized Street Wolf by Bernd Wolf and the only production Capri V8, the Perana from South Africa

The „Perana“ manufactured in South Africa was the only official Capri I eight-cylinder engine, a kind of „Holy Grail“ for Capri fans. Georg Klughardt didn’t miss the chance to import one of the very first Perana V8s.

Georg is not a blank slate in the Capri scene. You could describe him as a crazy person in a positive sense, because „he doesn’t just live Capri“, above all he swears by the exotic coupé. His greatest coup to date is the completion of the „Streetwolf“, the top chop Capri with gullwing doors built by Bernd Wolf. Word had long got around among the insiders of the Capri faction that a small-series eight-cylinder Capri was being produced in South Africa in the name of Ford South Africa. Basil Green Manufacturing was the name of the company in Johannesburg that exchanged the 3 liter Essex V6 of the Capri 3000 XL for the 5 liter Mustang unit, the Windsor small block. For trademark reasons, the originally intended sales name „Piranha“ was changed to „Perana“.

Basil Green fed the sharper-cam potent 5-litre V8 with a 460 Holley carburetor that was good for a whopping 240 hp. At that time, brakes seemed to have been relegated to secondary importance, because apart from harder brake pads on the front discs, the configuration of the Capri 3000 XL remained the same. Around 40mm lowered, around 500 Perana rolled out of the Basil Green workshop to the dealers. The car made motorsport history in South Africa. A slightly modified Capri Perana V8 won the South African Touring Car Championships in 1970 and 1971 with such superiority that it was banned from participating in 1972. In 1973 production ended in favor of the Granada Perana, which was not very lucky because of the first oil crisis.

Thanks to an acquaintance in South Africa, Georg made contact with an owner of a Capri Perana in 2001. However, the acquaintance was totally wrong in the assessment of the car. The Perana shipped in the container was as good as scrap. About a year later, Georg personally flew to South Africa to discuss technical details such as engine and brakes with Keith Johnson (Perana Manufacturing). Despite this, Georg put off the restoration until March 2007. With the help of the Nusi-Tuning-Capri Club Hungary he restored the base. Apart from the slightly pulled-out side parts, the body corresponds to that of a Capri I 3000, which means that the supply of spare parts remained a manageable fact.

One of the numerous previous owners had replaced the 302 Windsor small block with a 5.7 liter (351 cui) Ford V8, which produces 300 hp in the optimum setting. Large-volume engines in the Capri have a structural disadvantage: Because of the powerful oil sump of the V8, a larger engine mount had to be designed at Basil Green, and at the same time the steering moved behind the engine mount. „The thrust struts of the V6 could therefore not be used,“ reports Georg, who had new struts made by the Hungarian buddies, which are routed under the steering. Instead of the permanently mounted anti-roll bars, rubber-mounted anti-roll bars are used on the advice of the TÜV.

Before the German registration with H license plates was tackled, the issue of „brakes“ had to be clarified. „In South Africa they only valued performance, Bremen seemed to have been more or less indifferent,“ Georg suspects. In consultation with the TÜV, he installed a Willwood 4-piston brake system on the front axle and the drums of the Capri III 2.8i on the rear. The Willwood system would have vehemently resisted 13-inch wheels, so he mounted contemporary Minilite aluminum wheels in 7×15 inches. Capri specialist Peter Wade built a coilover kit that was precisely tailored to the car

Georg exchanged the totally filthy interior for an RS equipment There is no secret behind the right-hand drive, because the steering was simply „turned“ in South Africa. Although there is still some tuning work to be done on the engine and chassis, the car runs incredibly smoothly up to 200 km/h. The thermal problems could be solved thanks to the front lip, which directs the airflow into the engine compartment. The force of the eight-cylinder acting on the rear axle still has to be tamed, says Georg, who, in addition to optimizing the engine, is preparing a locked rear axle.