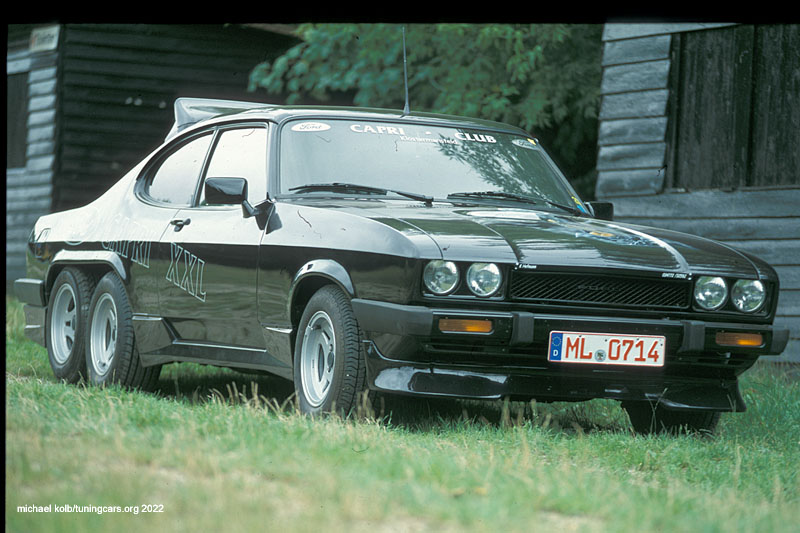 The three-axle Capri was the sensation at the 1st Ford meeting of the Escort Team Grimma in Panitzsch near Leipzig on the weekend of July 21, 2001. It is remarkable how Thomas Sacher transferred the topic „El Camino“ to a Ford Capri, although the real trigger was the over 20 years very popular Manta B front double axle.

The Ford Capri as a sporty pickup whose transition from the C-pillar to the loading area bears comparison with Chevrolet’s El Camino. From the idea of ​​a twin-axle „El Caprino“ to its realization, 1000 hours of creativity were translated into a work worthy of recognition. Shortly after reunification, Thomas developed into a Capri fan. In the meantime, he has acquired an impressive collection of almost 10 „long noses“ more or less destined for sacrifice. He learned something new with each of his Capris, because the cars always offered something to tinker with. The base vehicle that provided the chassis number was a 50-mark projectile that was not roadworthy and whose rear structure was slowly crumbling. Gathering together various parts only caused short distances through his private warehouse, since a „bad-front-good-rear“ car had long been waiting for its rebirth. The motto was two-make-one, although of course other victims also contributed one or two little things.

Only three new panels were used, the rest is remanufacturing in the truest sense of the word. „First I built the butt,“ he says in the quote from Saxony-Anhalt, before the double butt was connected to the chassis. Twice as the extended tail was made from a second welded-on Capri tail. Individual stages were checked by a gentleman from the monitoring association and the next sub-projects were then discussed. Straightening and welding sheet metal is no problem for a roofer. The difficulty lay in the lengthening of the leaf springs that had become necessary to suspend the second axle. This second axle is 5 cm higher and is, so to speak, an idler with no drive train and braking function. The front axle chassis corresponds to the series. The negative acceleration is entrusted to a system of the 2.8i, fitted with discs at the front and drums at the rear.

The machine also mentions 2.8 liters as its inner size. However, their „i“ was lost, because instead of injection, a double carburettor takes care of feeding the six-pack. The carburetor equipment runs much hotter, meaning the increased temperature of oil and water. „Which of course may also be due to the radiator being too old,“ he quickly adds. The valve cover of the 2.6 hp fits like a glove and detailed modifications such as checker plate and strut brace serve both the look and the stability. A brief overview of other body modifications brings VW into play. The roof rump was stolen from a Golf 16V and adjusted with a spatula. The rear wall and the associated glass pane come from an older VW bus, a butchered T2. Of course, the loading area is not only used for transport. Lined with ripples, it is easy to clean and is a storage place for various thirst quenchers during meetings, which are guarded by a mascot. There really is only one possible interior for this car, Thomas swears, because Ford offered the retrofitted seating and paneling in its Ghia models. Capri floor mats and airbrush on the dials complement the elegant interior of a unique „El Caprino”